It is "Decision Time" for Alpia

As Stagonia's defense of the treeline has stiffened, General Rossi of Alpia must make a decision.  Although he still has more forces than General Murdeau, is it enough to carry on with this thrust toward the Bellevue Hills?

As can be seen at left, Rossi has concentrated virtually all of his remaining forces near the south bridge.

Unfortunately they either need to thread their way through the wood line in open order or slowly file over the bridge.

Meanwhile General Murdeau will have time to concentrate his troops.

So how has this situation come about?

The "red" squadron of the Pincemail Cavalry, pushed back the Xelt regiment that they'd hit in the flank, routing it (and Brigaider Olivi) while converting their pursuit into the Picanti Swordsmen.

Sadly, after such heroics, Alpia's Qeel regiment shot the valiant squadron down.  Nevertheless the Xelts continue to rout and, like Stagonia's routing Hamoncourt regiment, do not look to rally for some time.

Goyette's marksmanship improved and they eliminated Asti Spumonti's orange squadron with a series of well-aimed volleys.  And La Capelle first shot up Qeel, then charged and destroyed it to avenge the loss of the Red Squadron. 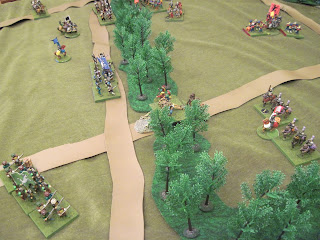 Meanwhile around the north bridge, while Alpia controls the bridge with Capt. Corelli's Light Gun, there is nothing to exploit the situation.

The lavender squadron of the the Cianti regiment has remained shaken for most of the battle despite Brigadier Lombardi's continuing unsuccessful efforts to rally them.

(note the routing Xelts (red banner) in the distance).

Here are the actual OBs:

Both armies have been battered and are around half of their starting effectives . . . presumably Stagonia will continue to contest the tree line in an attempt to protect the valuable wine country on the other side of the Bellevue Hills.

Will Alpia chose to continue their assault?  Or will they fall back and defend the territory they've already captured?