Well Deck 5 was a rather short turn and not particularly eventful.  The "Turn Over" card came up about a third of the way into the deck.  The outstanding characteristic of the deck was poor shooting (or bad powder) on both sides.

As can be seen at left, many "powder barrels" are present (indicating they fired) and most of them at close range . . . but only Alpia's Utti Regiment (yellow banner, upper right) was able to cause a casualty marker on Stagonia's Crossbows (in the cover of the middle building).

The crossbows had previously saved against the one hit by Alpia's Light Gun but failed their throw against Utti and so are now Shaken as well as down a Casualty marker.

Meanwhile, on the Hill, a number of units were able to deploy into line and shoot . . . but no one caused any damage.

Stagonia finally managed to get their Field Gun unlimbered so that it can shoot the next time the Artillery Card comes up . . . if it is still there and not shot to pieces or overrun. 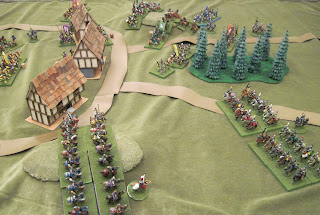 Meanwhile in the south, both cavalry brigades wait just out of charge reach.  Until one (or both) Generals sends orders, it looks like this situation will remain static.

The routing Stagonian Ardent Regiment appears to be far enough from Alpian unit to attempt to rally when its card next comes up . . . but down two Casualty Markers it is questionable as to how effective it might be.

Hopefully my players will email any orders soon and we will have the Deck 6 results.

Posted by Bluebear Jeff at 8:41 PM