A Tale of Two "Knight Fights"

Decks 18 & 19 were both short ones but very significant.

The very first card of Deck 18 was for Stagonia's Jillette Chevalier . . . and the Blue Squadron of those knights charged and obliterated both Captain Ariete's Battery and the Artillery Guards.

This charge has eliminated all of Alpia's troops short of the defenders of Rose House.

Note too that Stagonia's Goyette Pike and Shot Regiment (blue banner to right of Blue Squadron) has now advanced past the knights.

Izzo and the Lau Crossbows have exchanged a number of volleys so far with no-one gaining an advantage.  Both have just recently reloaded their weapons. 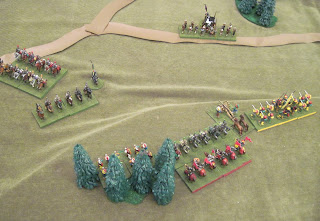 For whatever reason, Brigadier Olivi did not get his knights to counter-charge (i.e., they rolled "snake eyes" on their test to do so).  As a result they took the charge at a halt and lost the encounter.

During the fighting, Brigadier Olivi was slain and the squadron was understandably shaken by this event (i.e., they suffered a casualty marker and both Olivi and the squadron failed their saving throws).

In subsequent action, the squadron was again pushed back . . . but for the time being they have resisted routing ("box cars" on their save).

Still they cannot last long which will leave only the Telli Crossbows (who have withdrawn into the woods) remaining from Olivi's Brigade.

So, if Alpia is to hold onto Rose Ridge, it is Brigadier Franscioni's regiments which must hold out against considerable odds.  Can they last until dark?  Or will they be forced to abandon their position?

Only time (and General Rossi's decisions) will tell.