Again Alpia managed to gain on the 11th Deck . . . but is in perilous straights with two units one casualty marker from oblivion.

The deck started well for Alpia.  Qeel (brown banner, bottom of photo) managed to clobber Stagonia's Goyette Regiment (blue banner) with five hits causing a casualty marker . . . and Goyette then failed its test and was Shaken as well.

(Note that later in the turn Brigadier Delage joined Goyette and managed to rally them back to Steady).

Then Utti (yellow banner) finished off Stagonia's Lau Crossbows . . . and Brigadier Arnoux fell mortally wounded as well (he failed his save). 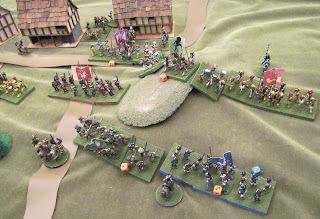 Of particular note has been the behavior of the Falcon Regiment (brown banner).  They have over this and the last few decks made several saves after being hit by Alpia's Artillery (between buildings).  Furthermore they shot up the Izzo Regiment (purple banner) so that it (as well as Zuff) are perilously close to breaking. 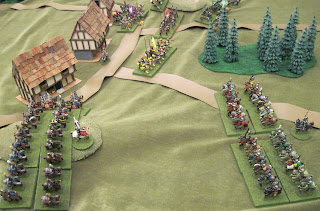 And while little has changed in the south where the two cavalry brigades are still staring at each other, General Rossi has dispatched a courier (visible at the south end of the middle building, behind Utti.

Of course couriers often fail to arrive safely and this one will probably need two more turns to arrive at Brigadier Lombardi's position with the Cianti Cavalry Regiment.

Posted by Bluebear Jeff at 4:10 PM