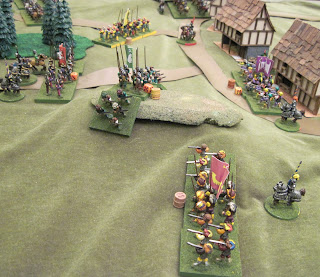 But then General Rossi's card appeared.  Qeel opened with four hits on Goyette causing a third casualty marker which dispersed them.

Izzo (purple banner) rolled three sixes against Falcon  (brown banner) resulting in a casualty marker and blown test which left them Shaken.  The Light Gun then hit them, causing them to rout.

He ordered Regiment de la Forquest to advance onto the Hill where they delivered a volley that dispersed Alpia' Zuff Regiment.  Then he joined the routing Falcons and rallied them. 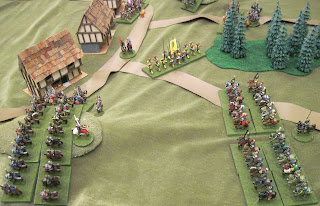 While the cavalry to the South remained just out of charge reach of each other, Alpia's courier isn't far from reaching Brigadier Lombardi.

Indeed, General Rossi himself has moved closer to the cavalry as well.  And although Regiment Utti missed its shot at Stagonia's cavalry, it is in position to do some damage once it gets itself in order.

So while this Deck involved very few cards, it did see the demise of a regiment on each side and perhaps bodes for some action soon in the south . . . depending upon what orders I receive and the luck of the cards and dice.

Posted by Bluebear Jeff at 2:17 AM