While it started out good for Stagonia when the Alpian Cianti Cavalry charged the Cheveaux de Rappeneau but were beaten and pushed back with a casualty marker . . . but Cianti and Brigadier Lombardi both saved so the regiment wasn't Shaken.

But then the Artillery shattered Stagonia's Falcon Regiment with a three-hit shot that dispersed the Regiment.

Brigadier Gilbert advanced the Cheveaux de Pincemail and then charged up the hill at the Asti Spumanti regiment, catching them at a halt . . . which should have been good but the Stagonian dice were poor and the Alpian dice splendid (only 2 hits to 4 even with Alpia suffering the -2 for being at the halt).

The result was the destruction of the lead Squadron and the second being pushed back . . . but it did not shake.

Perhaps seeing their fellow cavalrymen disheartened the Cheveaux de Rappeneau, for while they definitely had the advantage, the Cianti outfought their lead Squadron, dispersing it and pushed the second back as well. 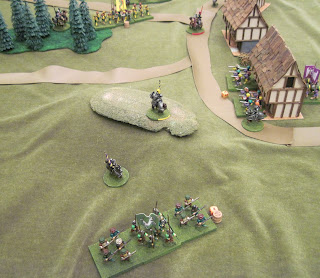 So with half its cavalry gone and only their Goyette Pike & Shot unit left, General Murdeau will likely have to break off and save what he can . . . (I will allow the two Squadrons and Goyette to escape unscathed if he so chooses.

A look at the North shows that there seems little point in pursuing the fight.  Izzo holds the Village and soon the Light Gun will seek out the slow-moving Pike & Shot regiment . . . and, in the South, the Stagonian cavalry is outnumbered two to one.

Posted by Bluebear Jeff at 9:13 PM