(I played out these two decks a couple of days ago . . . but I've been pretty drained from the chemo and don't remember a lot of it . . . so this report will mainly be photos to let the players assess the situaltion.)

As you can see at left, I've added pennants to the lances of the Knights.

I wanted the Knights, who move slower but hit harder to be easier to identify so that they won't be confused with ordinary Cavalry.

Here you see them (and some artillery) guarding the North Bridge.

Other than a lot of movement into positions by both sides there was little "action" other than just over the South Bridge.

Alpia's Telli Crossbows continued to be the "stars" of the early fight.  First they delivered the final blow to Stagonia's Ardant Regiment, shattering it so that it is no longer a factor in this fight.

Then, with only half of their elements firing, they scored 6,6,5 and thus caused a casualty to Stagonia's Hamoncourt Regiment (red banner with white stag), causing it to shake.  But they were, in turn savaged by Stagonia's Lau Crossbows who had marched across the meadow and turned to deliver a casualty marker and shake the Tellies . . . who soon managed to rally.

Currently the two crossbow units are facing off (with Stagonian cav coming up.  Telli is in Open Order but has a Casualty Marker; and the Lau are fresh.

The two pike & shot regiments, Stagonia's Hamoncourt (red banner, casualty marker and shaken) and Alpia's Yarp (orange banner, fresh) are facing off . . . as Stagonia's Brigadier Delage keeps both of his units "in command" as some artillery is moving up as well as the cavalry.

Following are a pair of photos from slightly different directions showing more of the situation around the North Bridge: 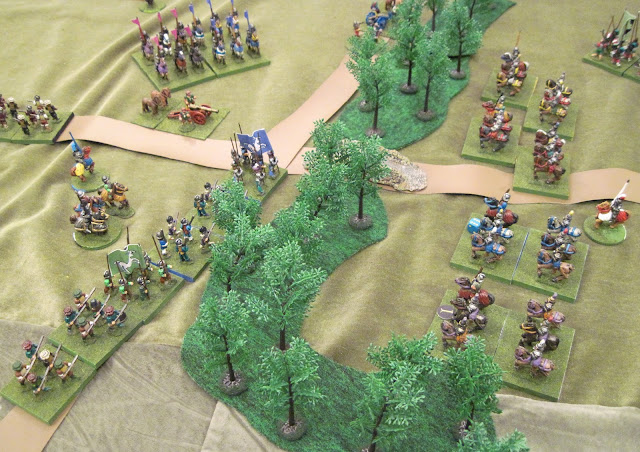 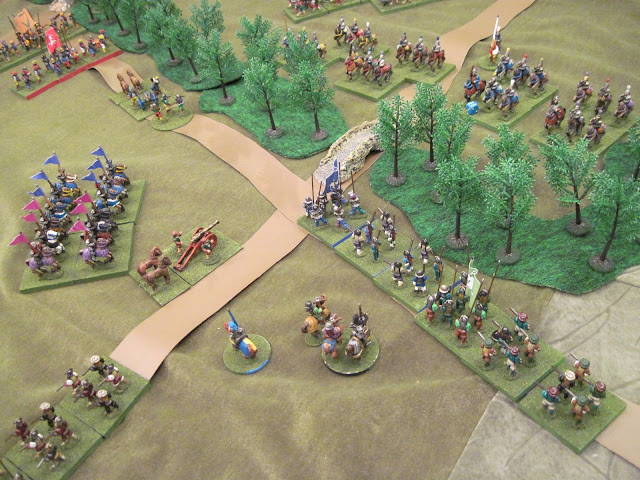 Below is an overview of the treeline from the South South West: 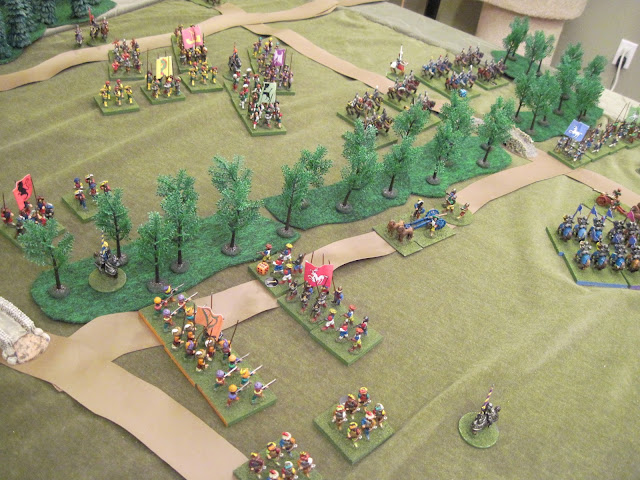 And, finally, a pair of images showing some of the positions of the behind-the-lines maneuvering units for the Alpians and Stagonians:

So now all I need is for my Generals to find some time during this Holiday Season and let me know what they want to do.

And I sincerely hope that all of you are able to enjoy your Holidays as much as I'm enjoying these Alpian Wars battles.

Posted by Bluebear Jeff at 1:02 AM